Kemper System's reinforced liquid-applied roofing membranes have been installed when traditional roof membranes fail to meet project demands. They withstand substrate expansion/contraction and fully adhere to seams and transitions. Kemper System membranes are permanently resilient and resistant to ice and ponding water. In addition, they preserve the architectural appearance of metal roofs and are an excellent alternative to metal roof replacement.

Solution
Construct a sophisticated scaffolding system provide safe access to the work areas, which were located over 100 stories above street level. Kemperol waterproofing membrane was installed, and Kemperdur colored coating was applied to match the color of the existing metalwork. The flexibility of the Kemperol membrane allowed the fabrication of tight flashings around all antenna penetrations and decorative metal fabrications.

Challenge
When the U. S. Capitol was expanded in the 1850s, the original wood-frame dome was replaced by a cast-iron dome. The plates, which together weigh about 4,450 tons, expand and contract slightly, depending on the weather. When several leaks were found and the water started penetrating into the Rotunda, an extensive restoration program was started in the late 1990s. Problematic were, among others, the 33 antefixes, characteristic elements derived from the ancient Greek and Rome design. Water had started leaking into the structure behind the architectural elements.

Solution
To prevent further deterioration waterproofing the dome behind the cast iron ornaments had become necessary. However, this turned out to present a challenge to the architect as the area is difficult to access and extremely tight to work at. A liquid-applied system that fully adheres to the substrate, following any shape and contour of the surface was the preferred solution. It gives the system the ability to withstand structural movements between elements of different materials and compensates for the impact of frost-thaw cycles. Kemper System waterproofing membranes incorporate a high tensile strength, polyester fleece reinforcement which can be tailored to the area that is to be waterproofed. In combination with the cold-liquid applied resin it forms a durable membrane.
> Read PDF 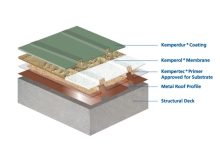 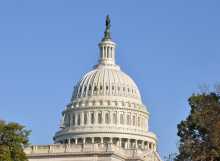 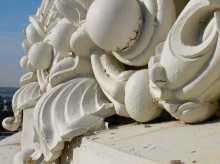