Repairs, Refurbishment and Water Ingress by the Sea 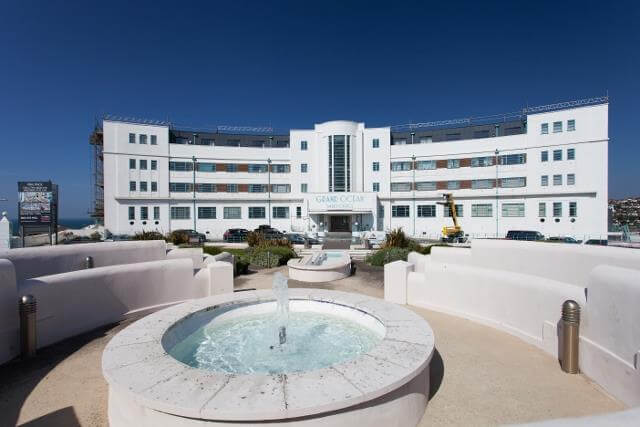 Repairs, Refurbishment and Water Ingress by the Sea

You only need to see a picture of The Grand Ocean Hotel in Saltdean, near Brighton, in its heyday to capture a glimpse of a bygone era of glamourous seaside elegance and affordable luxury in surroundings that epitomised contemporary design.

The Grade II listed building first opened on a four-acre  site  in  1938  with 344 bedrooms  and  a  dining  hall that could seat 300. Its crescent-shaped white fa<;ade with pillars at each end and a bulbous central pillar makes it a classic of Art Deco architectural design.

Now the central building from which a development of luxury apartments takes its name, this costal landmark  has had a varied history, which includes being requisitioned by the Auxillary Fire Service during World War II, used as a Fire Service college after the war and becoming a popular honeymoon destination in the 1950s after it was acquired, repaired and re-opened by holiday camp pioneer, Billy Butlin in 1953.

While Butlins sold the iconic hotel in 1999, it remained open as a hotel until 2005 when planning permission was granted to convert it into luxury apartments. The consent also included construction of an additional four new build apartment blocks within the grounds. 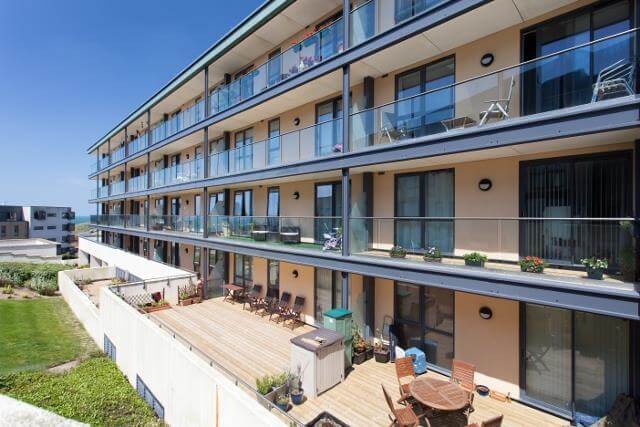 Design of the new build blocks was in-keeping with the main hotel building and every attention was taken to preserve the original structure in line with its listed status. However, problems with the integrity of the waterproofing system originally specified became apparent even before the scheme to refurbish the main hotel building had been completed. This led to a change of both roofing contractor and, eventually, roofing system.

Both the existing hotel building and the four new builds on the site are of  a flat roof design and the  architect  had specified a liquid waterproofing membrane as an effective and easy-to install solution that would maintain the listed building while also providing a neat finish for the new builds.

Unfortunately, the system selected was not robust enough to adhere seamlessly to the roof substrate as a permanently elastic, monolithic membrane. The development's coastal location, required a more durable and flexible membrane that could withstand a moist and salty atmosphere, high UV levels and, most importantly, would adhere permanently to both the roof and all upstands and outlets.

When the integrity of the waterproofing membrane on the four new build structures was first compromised, however, the assumption  was made that the issue  lay with the quality of  installation  rather than the suitability of the membrane, because this can sometimes be the root cause of roofing system failure.

The majority of the problems with the roofing material were around the upstands, where the originally specified roofing system had not adhered sufficiently to the vertical surfaces and was not flexible enough to cope with structural movement. While repairs using the same membrane seemed to address the issue briefly, the problems with the bond between the membrane and the substrate and the lack of elasticity in the cured membrane meant that the same issues recurred following the repairs.

As Kevin Cawston from Cawston Roofing comments: "It became clear that using the same system to repair the defects simply wasn't going to work because it wasn't suited to the application.

"At the same time, the project to refurbish the main hotel building was nearing completion and the main contractor was keen to find a solution that would both answer the requirements of  the  four  new build blocks and would offer a permanent solution for the roof of the main building before water ingress could damage the structure or the newly finished interiors." 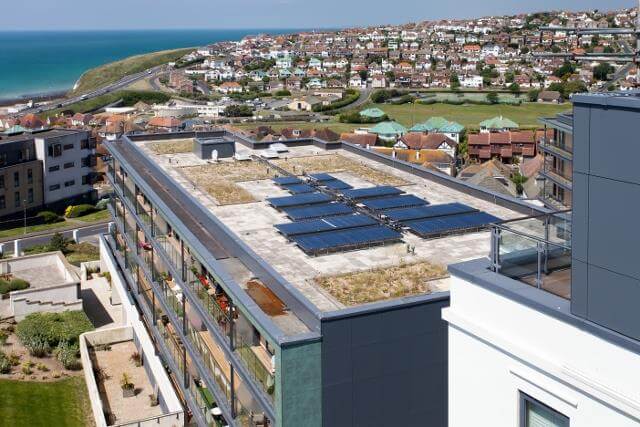 Having used Kemper Systems' Kemperol membranes on a wide variety of construction projects in the past, Cawston Roofing was confident in recommending Kemperol V210 cold liquid-applied waterproofing membrane for remedial works to both the new builds and the former hotel building, including both the roof areas and all balconies and terraces. Rather than carry out additional repairs using Kemperol V210, the decision was taken to install the Kemperol V210 roof as an overlay onto the existing failed membrane wherever possible and to strip out the existing and replace it with Kemperol V210 in areas where overlay was not viable.

The existing roof build up for the new build apartment blocks was an inverted roof with the originally specified membrane installed beneath the insulation. The Cawston Roofing team removed the paving slabs and green roof medium along with the insulation and, where possible, this was stored for re-use in the new roof build up.

The company then had to carry out preparation and cleaning of the roof surface before installation of the Kemperol V210 membrane could begin. In the areas around the upstands where the failed membrane had not bonded, the Cawston Roofing team simply pulled off the damaged membrane.

The insulation, slabs and green roof medium that had been removed to enable Cawston Roofing to access the failed waterproofing membrane were then reinstated to complete the roof.

As Kevin commented: "By the time we were carrying out the overlay of the failed membrane with the Kemperol V210 system the apartments in the four new blocks were already occupied.

"This meant that ease and speed of installation were essential to prevent any water ingress during the works and ensure that we completed each building with as little disruption to residents as possible."

The build-up for each of the terraces was the same as the main roof for each of the new build apartment blocks and Cawston Roofing used the same process and materials, removing the paving slabs for re-use before overlaying the membrane and replacing the remainder of the inverted roof system.

For the roof and balconies of the former hotel building, however, the damage caused by the failed waterproofing membrane was even more significant because the original roof build-up was not inverted.

Cawston Roofing tackled the balconies first and had to strip out the entire roof build-up of paving slabs, waterproofing membrane and insulation. Here, not only had the originally specified membrane failed but, as a result of the water ingress, the insulation below it had begun to rot.

Having completed the strip out, Cawston Roofing had to allow for the concrete substrate to dry on each balcony before the waterproofing could take place. In order to fast track the project, the decision was then taken to reinstate the build-up for each balcony as an inverted warm roof.

As Kevin explains: "New insulation had to be cut to size and shape to replace the rotten insulation that we had stripped out.

"We were able to do this while the Kemperol V210 membrane was being installed so that we could complete the balconies in as short a time frame as possible, ready for the building to be occupied."

Cawston roofing used the same primer, resin and fleece for the balconies of the  refurbished hotel as for  the  new build apartment blocks, allowing the system to cure before completing  each  balcony  with  new  insulation  and paving slabs or decking required.

The installation team then moved onto the 8,500m2 former hotel roof, which comprises five 'fingers' with a central core. Water ingress around the roof outlets where the failed membrane had not bonded properly meant that the recently installed warm roof insulation was already sodden and the roof had to be stripped back to the vapour barrier.

To aid water run-off in the future, Kemper System designed a tapered Kempertherm insulation scheme, introducing a slight pitch to each section of roof. Cawston Roofing pre-primed each piece of board in an on-site workshop during the winter months to aid faster installation once the weather improved.

When weather conditions did improve, the Kempertherm sections were fixed to the substrate and joint sealed before application of the Kemperol V210 membrane began. 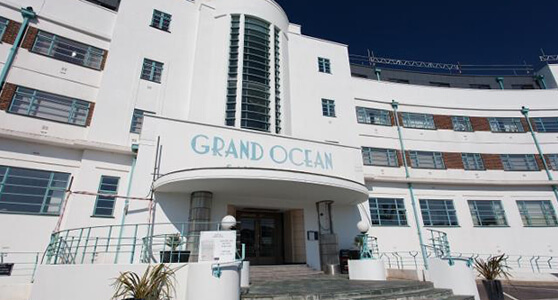 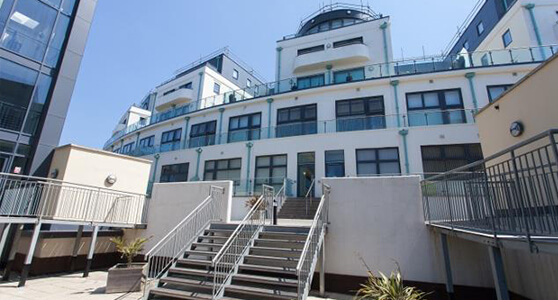 The latest residents have now moved into the historic former hotel, continuing its journey from hotel, to fire service training, holiday camp and, finally, luxury homes.

Thanks to the replacement of the originally specified waterproofing system with Kemperol V210, the  building  not only provides a stylish address on the coast that is warm and dry for residents but also protects a slice of our holidaymaking heritage.