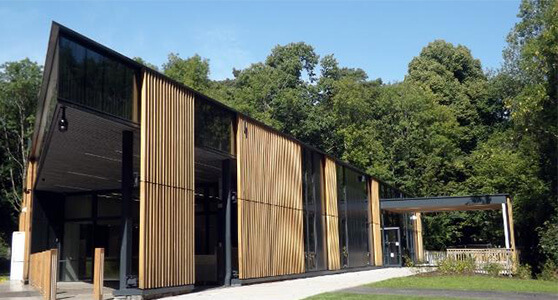 Amgueddfa Cymru - National Museum Wales, is made up of seven museums across the country. Named after the village near Cardiff where it is located and set in the grounds of an Elizabethan castle, St Fagans National History Museum is one of these sites and was established in 1948 to chronicle Welsh lifestyle, culture and architecture. The open-air museum now attracts almost 600,000 visitors each year to its picturesque 100-acre site, offering them the unique opportunity  to  wander  around more than  50 historic structures from various periods  of Welsh history that have been moved from all over the country and re-erected at the Museum; these include cottages, mills, shops, places of worship and workshops.

With a £25 million makeover now underway, thanks to the largest ever grant awarded in Wales by the Heritage Lottery Fund (HLF) £11.5 million and funding from the Welsh Government. The scheme comprises completely refurbishing the Museum's main building with new galleries, learning spaces and visitor facilities, reconstructing two significant, lost buildings from archaeological evidence, the 'Gweithdy' (Welsh for workshop), a gallery and activity space that celebrates the craft of the maker. It is a multi-purpose sustainable building and will encourage visitors to experience traditional skills first-hand.

Designed by FCB studios and constructed by principal contractor, Kier, the 'Gweithdy' is a BREEAM 'Excellent' building located in a woodland setting within the museum's existing grounds. Its design and specification reflect its natural location, in terms of both sustainability and aesthetics. The building envelope for the steel framed structure combines curtain walling and stainless-steel cladding to act as a mirror that reflects the landscape onto the facade. Meanwhile, grey panels and wooden slats installed as vertical features to echo the tree trunks all around the building complement nature's palette.

The 'Gweithdy' has been constructed with a steel deck roof supported by steel beams and glulam beams that will also form a feature within the internal gallery/workshop area. The roof has been designed with a slight pitch to aid drainage and features a number of upstands, outlets and gutter flows.

The architect's original specification for the roof called for a single ply membrane but the roofing and cladding contractor appointed to the scheme, M.H. Massey, proposed that this should be changed to KEMPER SYSTEM's KEMPEROL ® V210 wet-on-wet liquid membrane.

As M.H. Massey's project manager, Dave Sampson, explained: "A flat roof of this size in a woodland site and a location known for its wet climate is potentially vulnerable to leaks if a seamed system is used because even a 1mm gap in the weld could result in water ingress.

"Our advice was to opt for a seamless membrane that adheres directly to the substrate to form a flexible monolithic membrane and our experience of KEMPER SYSTEM's membranes led us to suggest KEMPEROL ® V21O."

M. H. Massey proposed the change to Kier and set about convincing the design team at FCB Studios that revising the roofing specification would benefit the project. Samples of cured KEMPEROL® V210 were made up to demonstrate the flexible seam-free membrane and the discussions resulted in the change of specification being agreed as part of a warm roof build up.

KEMPERTHERM® FR insulation board has a 3mm reinforced facing that can be used on areas subject to greater point loading or more frequent traffic. This offers a cost-effective solution for more frequently trafficked areas and avoids the labour and material costs of a traditionally used plywood strengthening layer.

Working in sections, the insulation was laid directly onto the vapour barrier, with the joins between sections sealed using KEMPERTHERM® joint fleece, before application of a primer and then the reinforced KEMPEROL ® V210 resin to complete the 900m2 2-part roof one area at a time.

Although some of the contractor's team had wide ranging experience of using the KEMPEROL ® system, others had previously only been used to laying single ply membranes, so Kemper System provided installation training at the company's purpose-specified training facility in Warrington. Technical representatives from KEMPER SYSTEM also visited the site during the programme to advise and support the installation team.

On completion of the roof areas a man safe system was installed and the fixing points subsequently waterproofed using KEMPEROL ® V210 to maintain the seamless membrane. 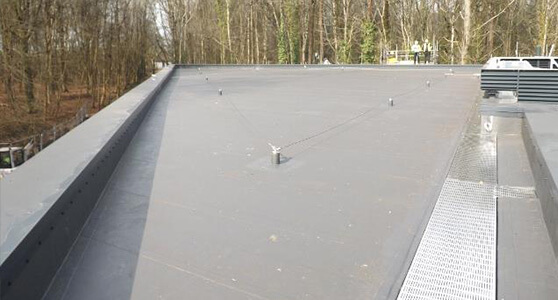