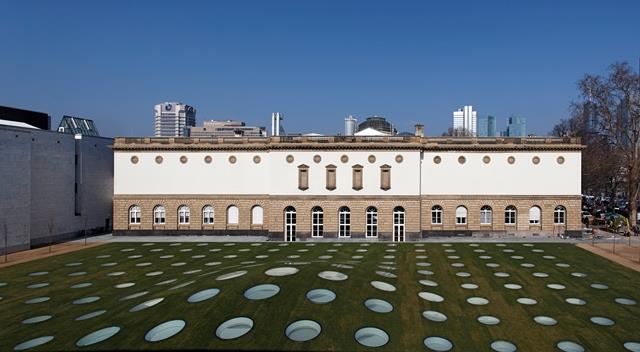 The basic idea was compelling from the very outset the architects schneider + schumacher, who won the international design competition for the project in 2008, decided to go underground to build the extension for Frankfurt's Stadel Museum. Instead of adding another overground wing to the existing ensemble, the architects dug under the garden of the existing building to create a stunning new gallery. The 3,000 square metre exhibition space, where the museum will be presenting its contemporary art collection, opened at the end of February 2012. The spectacular new building - an underground art gallery in the garden, visible from the outside with its dome­ like bulge and 195 circular skylights, has sparked enormous public and media interest since it opened and brought an influx of visitors to the Stadel Museum.

Architecture creates a stage for art

The Stadel Museum, located in a prominent position on the Museumsufer in Frankfurt, is one of the most important museums in Germany and has made a name for itself in the international art scene with its great art, inspiring exhibitions and big names. In 1815, Johann Friedrich Stadel, a banker, spice trader and patron of the arts from Frankfurt, laid the foundations for the museum when he left his extensive art collection and his fortune to the citizens of Frankfurt. The museum has continued this close relationship with patrons to this day. Half of  the total cost of €35 million for the new extension, which has practically unqualified public support, was funded  by private benefactors. schumacher + schneider have achieved an astonishing feat. Their architectural work bows down to art and creates a truly unique space for art to shine.

A green roof with "Eyes for Art"

Inside, the all-white gallery rooms are dominated by the elegantly shaped dome which spans the entire exhibition space. The reinforced concrete structure, which is supported by only 12 interior columns and the outside walls, rises to a height of 8.2 metres at the highest point of the dome. The inside is illuminated by round skylights which are evenly spaced across the entire ceiling. The skylights, which have a diameter of between 1.5 and 2.5 metres, flood the space below with natural light as well as forming a captivating pattern of light in the garden area above at night. Outside, the green, dome-like protrusions- called "Eyes for Art" by the architects and developed specially for the project, lend the Stadel garden a unique look. The striking bull's-eye ceiling is a work of art in itself: the architecture serves art and manifests itself as a work of art. 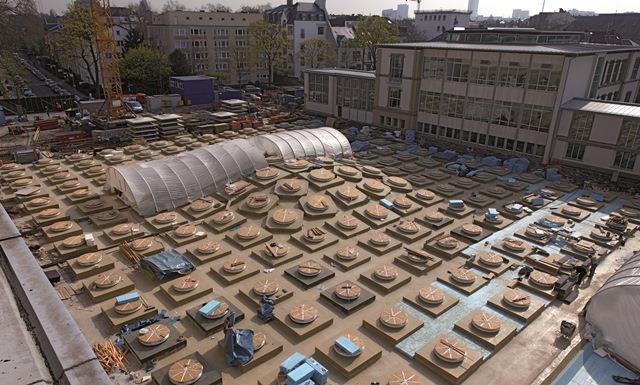 The domed green roof also doubles up as a fully accessible garden. The geometry of the 195 round skylights in the roof is typically difficult to seal, which is why the architects planned to use a liquid waterproofing system from the very start. The product of choice for this project was KEMPEROL® 2K-PUR, an odourless, solvent-free system which causes no odour emissions during application.

PB Flachdachbau, a long-standing, experienced KEMPEROL® partner, was contracted to provide waterproofing and sealing. Work lasted from September 2010 until September 2011. Company owner Jurgen BartmuB refused to be deterred by set-backs in the overall planning: due to delays, work on sealing the round skylights was not able to start until mid-December 2010 and ran until the beginning of April 2011. In keeping with the motto of all outdoor fans that there is no bad weather, only unsuitable clothing, Jurgen BartmuB shrugged off this challenge and had the Stadel construction site "dressed" in waterproofs and heated tents installed. While the temperatures outside dipped far below zero, even going as far down as-15°(,the team inside worked their way forward gradually despite the adverse weather conditions.

In the first step the substrate between the square skylight flanges was either sanded or blasted, depending on its condition. The contractors applied solvent-free KEMPERTEC® EPS primer over the entire concrete substrate. This product, which is based on epoxy resin, can be applied in ambient temperatures as low as S0  C. Like with all KEMPERTEC® primers, residual moisture in the concrete substrate must not exceed 5% in the top 2 centimetres. To avoid a film forming on the surface, care must be taken not to go below the dew point. When the product is applied the surface temperature must be 3K above the dew point.

While the new extension was being built, comprehensive renovation work was also carried out on the existing buildings. To ensure complete, enduring water-tightness all joints and details were also waterproofed with KEMPEROL®. 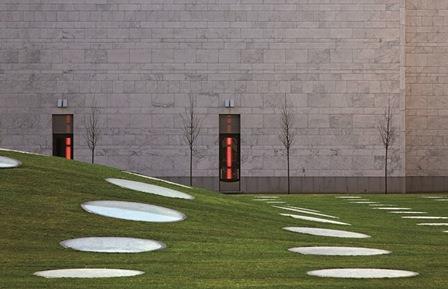 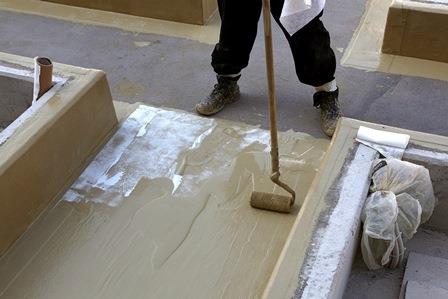 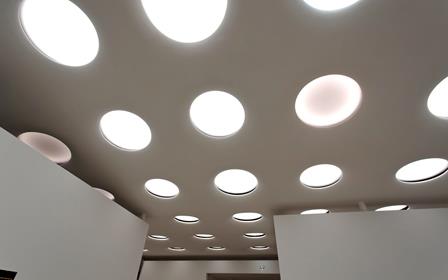 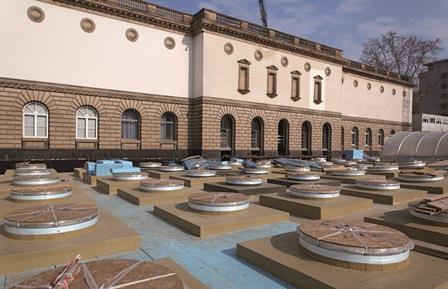