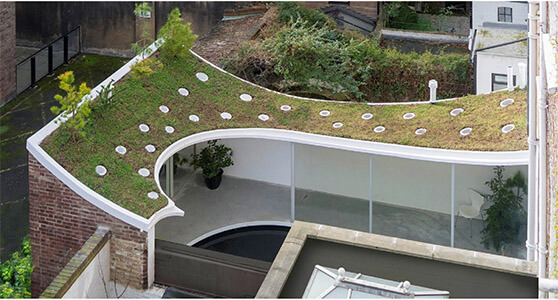 Designed by architects Tonkin Liu, the 'Sun Rain Room' forms part of the restoration of a Grade II Listed Georgian townhouse in London and features the work of local craftspeople. The building is also home to architects Anna Liu and Mike Tonkin and provides a studio for their practice.

A 'Good Place on a Bad Day'

The two-storey extension reframes the rear of the building and features a new garden room offering living space and a meeting area for the studio. A mirrored wall in the covered outdoor area beyond conceals a workshop, cooking area, tool shed, store, and deep planter for the small trees in the green roof above. Below the patio, the existing basement has been extended to create a bedroom, two bathrooms and an enlarged plant-filled lightwell.

One of the most striking features of the new extension is a curved, 10m-long roof, which dominates the space and frames a bean-shaped courtyard. A pipe runs down the building's rear wall to meet the new roof. When rainwater gathers at the top of the  townhouse  it  falls through the pipe and follows the roof's curving leading edge to a spout over a long rainwater harvesting tank. The tank floods the patio at the push of a button, transforming it into a reflecting pool.

Structurally, the roof is unique as it has been built using layers of 6mm plywood, which sandwich an insulating core and allow for 25 circular skylights. A thin steel support post hidden within the glazing framing allows the roof to apparently span free over the space.

Given the unusual shape and style of the roof structure, Kemper System's Kemperol 2K-PUR was specified for the waterproofing. 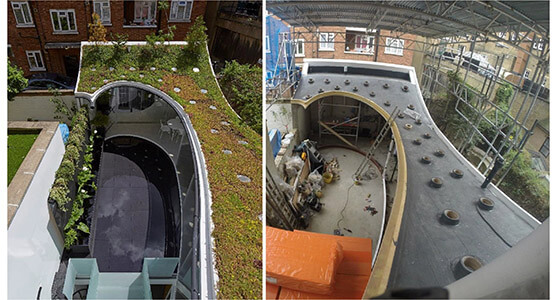 Odourless and solvent free, the liquid waterproofing system was installed by north-London based roofing contractors Liquid Waterproofing Ltd. It was applied directly onto the 11Om-thick plywood structure, in a single wet-on-wet process using a reinforcement fleece. Once cured, the system formed a seamless, elastomeric waterproof membrane which bonded directly to the substrate.

Tony Mctigue director of Liquid Waterproofing Ltd said: "The steep slope and curves on this unusual roof demanded a very easy to apply and durable waterproofing solution, so Kemperol was ideal. As it is laid using a roller and wet-on-wet, we were able to install it quickly and effectively including around the detailing, specifically the circular lighting units.

"As the structural concept hadn't been tried before, the roof was carefully load tested using bags of water. As Kemperol has excellent elasticity this also provided the assurance that the waterproofing would not be affected if there was any movement."

After the Kemperol 2K-PUR had been applied, it was topped with richly planted sedum. However, as parts of the roof's perimeter remained visible, Kemperol Reflect was also applied. This is a white waterproofing system comprising special liquid synthetic properties which reflect UV and infrared radiation away from the roof, ensuring the surface temperature remains cooler than when using traditional darker roofing materials.

Stuart Hicks from Kemper System commented: "Kemperol provided a perfect membrane for the green roof and will provide long-term protection, ensuring this stunning structure retains its impressive appearance for many more years to come.

"As the property is in close proximity to a number of neighbours and is also used as workspace for the architectural practice, which remained operational throughout the project, the fact Kemperol  2K-PUR is odourless and solvent free was another major benefit."

The Sun Rain room has won multiple awards including being named the overall winner of New London Architecture's prestigious Don't Move, Improve! awards in 2018, which showcase the Capital's best and most innovative new home extensions. 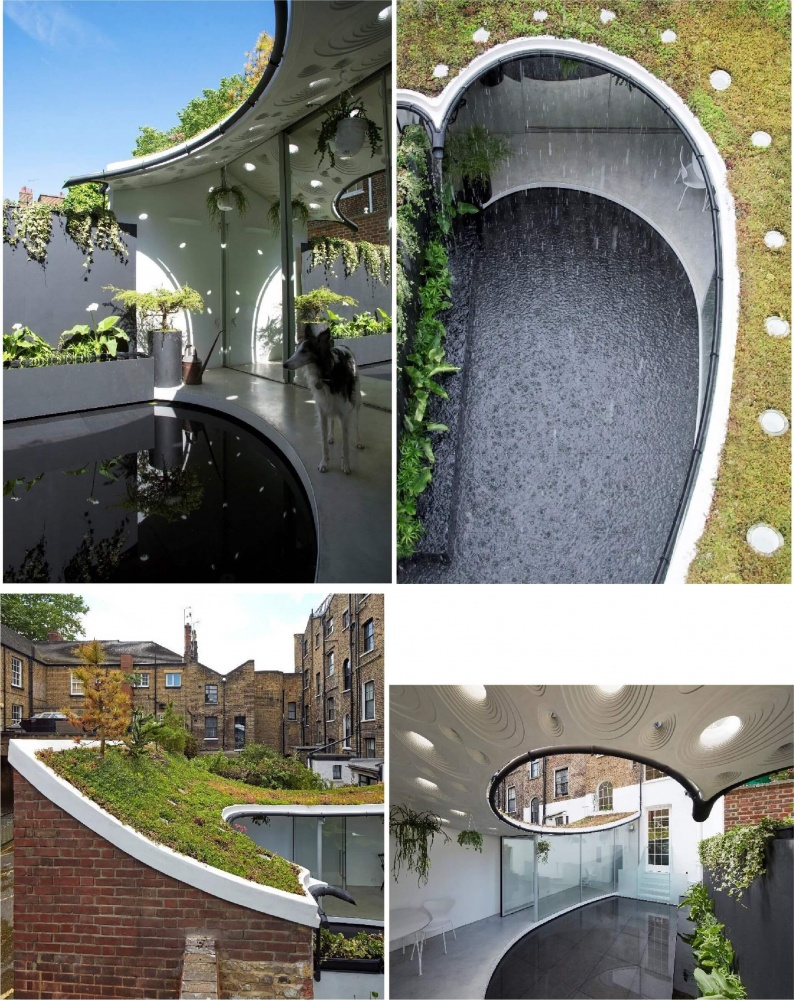